Hello Folks. As you know AMSI is something that you will most likely come across almost in every Red Team engagements. As of today bypassing AMSI is not as hard as it sounds. In this specific blog post we will look into what AMSI is, how it works and how to bypass it.

Basic knowledge of powershell, assembly, Virtual Memory, Frida. In case you are not I would recommend you spend sometime to get little familiar with those topics.

Windows Program Execution in a nutshell

Whenever a user double clicks a program or runs the program by other means, it’s the responsibility of the Windows loader to load and map the contents of the program in memory and then the execution is passed to the beginning of the code section. 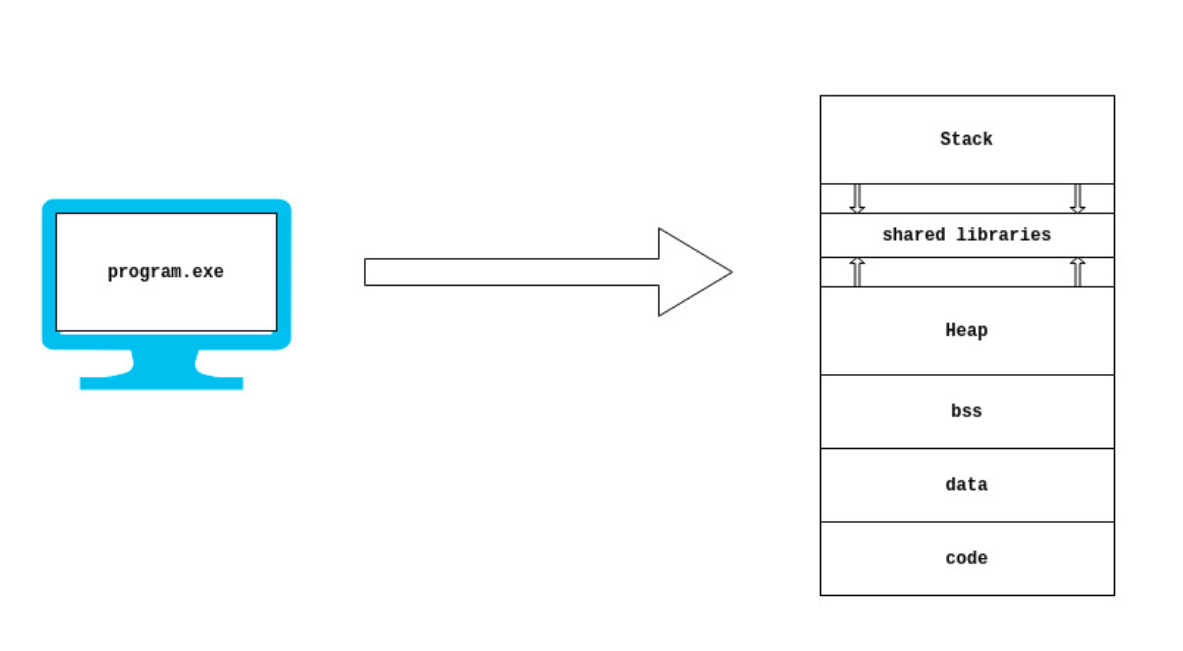 For the windows loader to load the program successfully into the memory, the program(binary) must be present on the disk.

In the past AVs were not as smart as they are today. AVs would almost totally rely on signature based detection to determine if the content is malicious or not. AVs would only start their action as soon as some file is written on the disk or a new process is created (note: there are many more ways they would use to detect malware but these two were the most common ways to trigger AVs to start scanning). Now AVs are more smarter and the current detection methods include (This is not a comprehensive list but mostly seen):-

Be it any detection method, it’s easier for any AV products to do it while the binary is on Disk. At-least it used to be the case before AMSI, it was hard for AV products to detect fileless malware(which doesn’t drop it’s artifacts on the disk and completely executes in the memory). Even as of today it’s the objective of most Adverseries and Red Teamers to not touch the disk or try to reduce it as much as possible cause it just reduces the likelihood of getting detected.

Powershell has a cmdlet i.e., Invoke-Expression which evaluates or runs the string passed to it completely in memory without storing it on disk.
We can also verify it with the help of frida, you can also use APIMonitor here if you want.
I will be remotely calling a simple powershell script that has a function which just prints the current date.

If the program has to write something to a file on disk, it will utilize the WriteFile or WriteFileEx API defined inside kernel32.dll. So here we are tracing all API calls which starts with ‘Write’ inside kernel32.dll. So we can clearly see that the IEX cmdlet doesn’t write the contenst to the disk, rather it executes the contents directly in memory. (Note: when you press up or down key, you will see a call to WriteFile API, that’s not called by IEX)

So for attackers and Red Teamers it was all going easy, days were good and there were no worries about getting detected. That’s when Microsoft introduce AMSI with the release of Windows 10. At a high level, think of AMSI like a bridge which connects powershell to the antivirus software, every command or script we run inside powershell is fetched by AMSI and sent to installed antivirus software for inspection.

Initially AMSI was introduced only for powershell and later it was also integrated into Jscript, VBScript, VBA and then very late was integrated into .NET with the introduction of .net framework 4.8

AMSI is not only restrcited to be used in Powershell, Jscript, VBScript or VBA, anyone can integrate AMSI with their programs using the API calls provided by AMSI Interface. The AMSI API calls that the program can use (in our case powershell) is defined inside amsi.dll. As soon as the powershell process has started, amsi.dll is loaded into it. We can verify it with Process Hacker 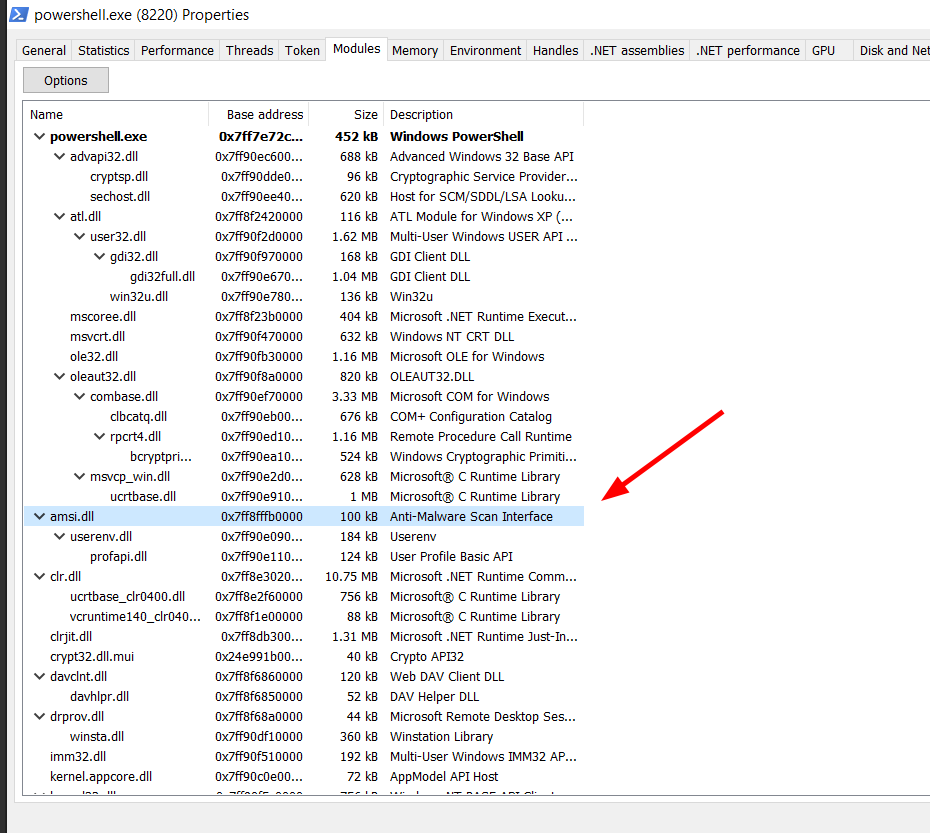 AMSI exports the below mentioned API functions that the program uses to communicate with the local antivirus software through RPC. 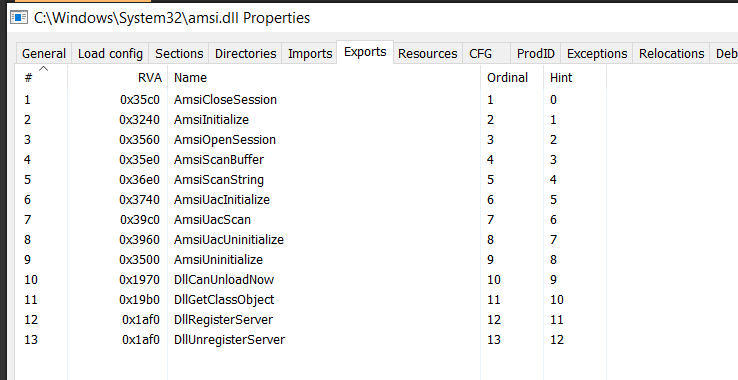 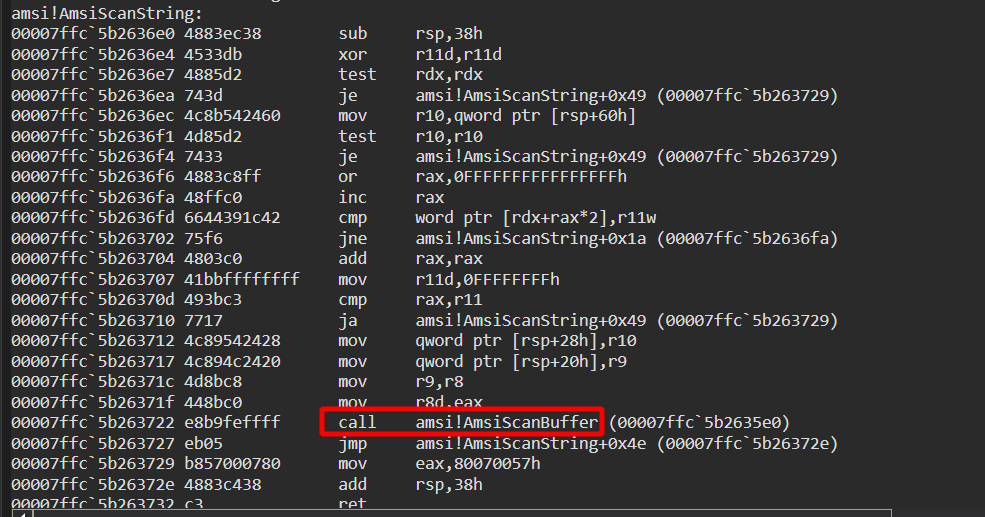 The two most commonly used method for bypassing AMSI is obfuscation and Patching amsi.dll in memory.

If we can strip or obfuscate the words in our script that gets detected by the AV, we can pretty much run any script without being detected but it’s not feasible to obfuscate or strip all detected words as it takes more time or might even break the script, even AV keeps updating it’s signature, so we got to keep updating our script accordingly.

So, it’s not seeming feasible to obfuscate as every AV vendors might have different signatures and it keeps updating. The other mostly used AMSI bypassing is by patching the AmsiScanBuffer function as the amsi.dll library is loaded in the same virtual memory space of the process, so we have pretty much full control in that address space. Let’s see the AMSI API calls made by powershell with the help of Frida.

Above we are tracing all the AMSI API calls made by powershell. We can’t see the arguments passed to the function nor the results returned by the AMSI scan. When we first start frida session, it creates handler files, we can modify those file to print the arguments and results at runtime. 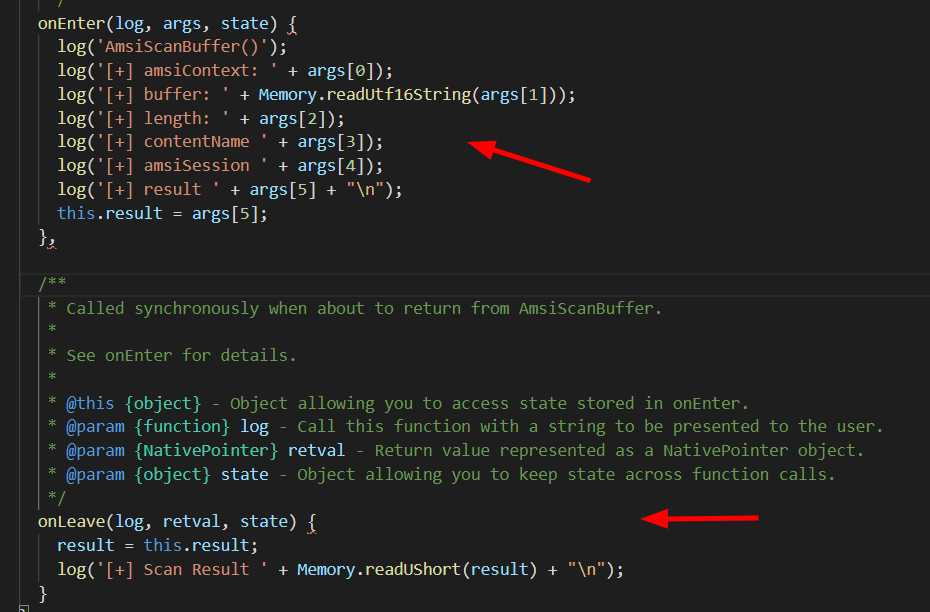 Above we modified the handler file to print the arguments to the APIs when they are called and print the result on exit. 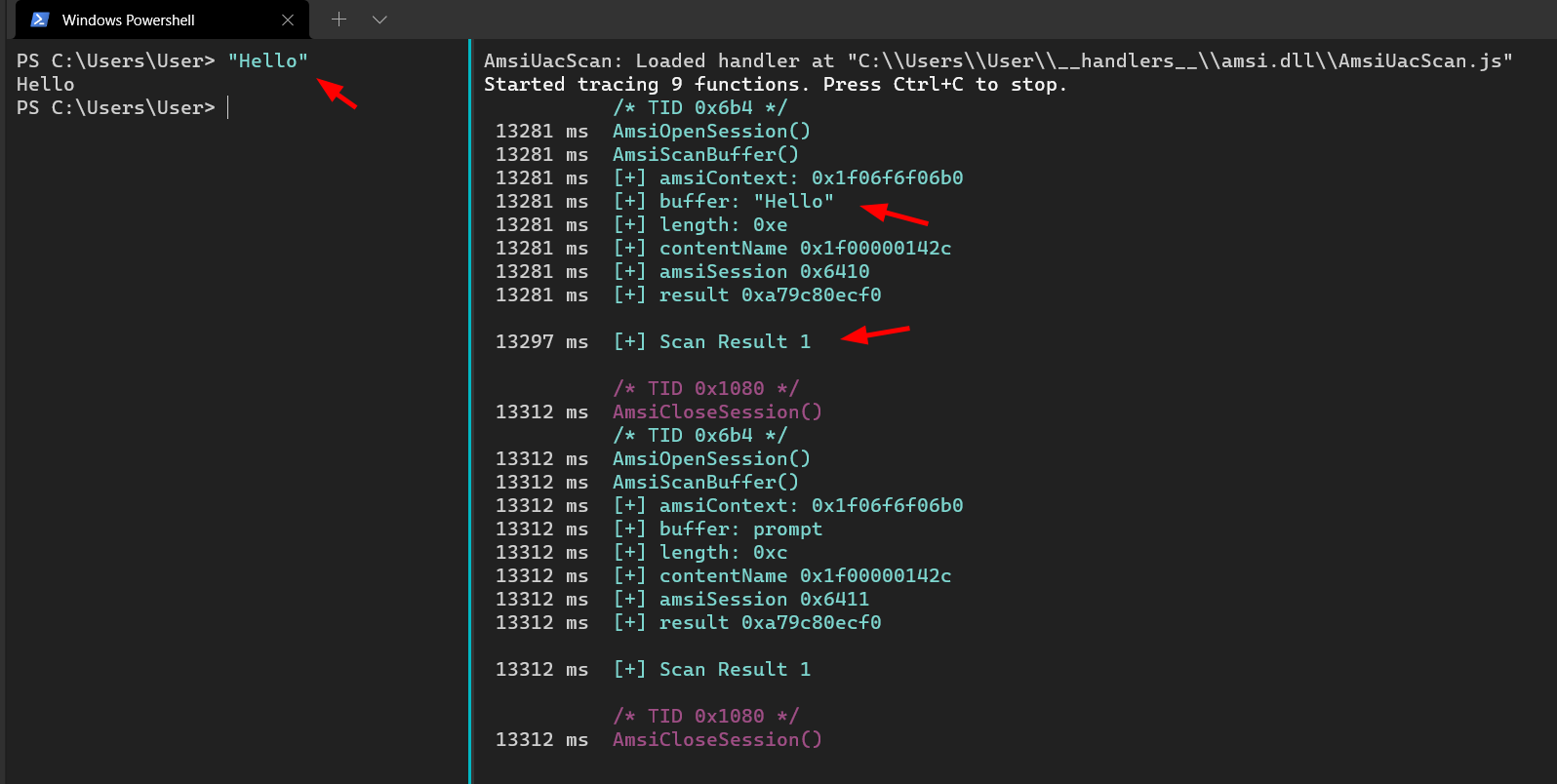 The actual scanning is performed by the instructions in the left box. The instructions at right is called whenever the arguments passed by the caller is not valid, 80070057h corresponds to E_INVALIDARG. And then the function ends.

So we can patch the beginning of AmsiScanBuffer() with the instructions in right box i.e., mov eax, 80070057h; ret. So that whenever AmsiScanBuffer() is called, it returns with the error code instead of performing the actual AMSI Scan. The byte that corresponds to that instruction is b85700780 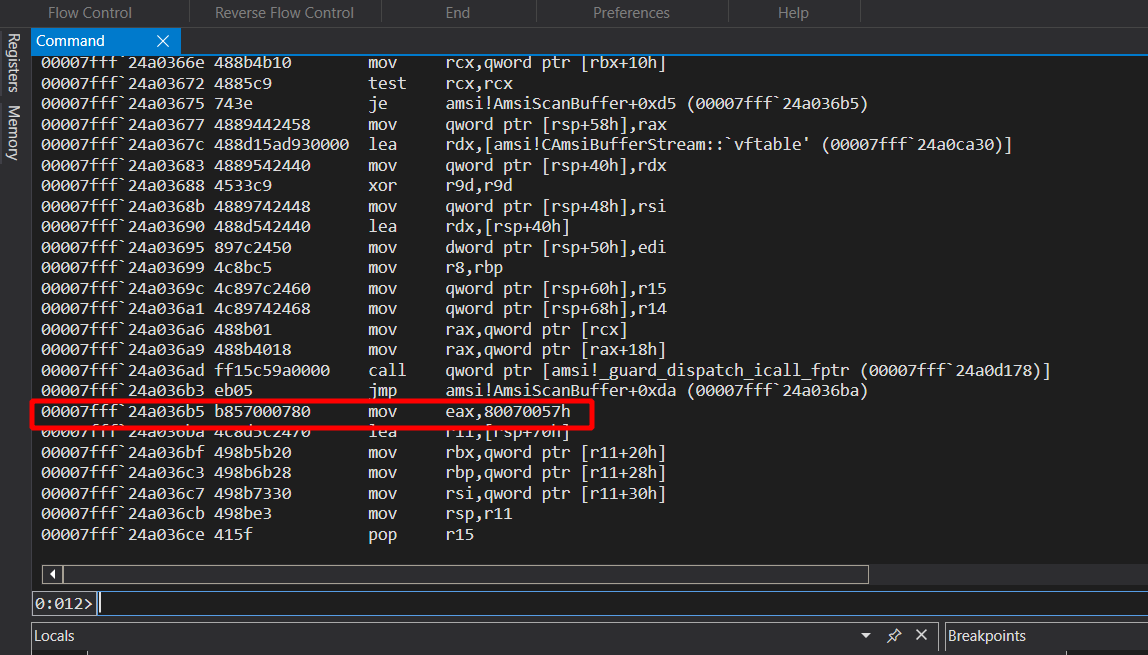 We need to modify the beginning of AmsiScanBuffer with

The bytes that correspond to the above instructions is b857000780c3

We need to reverse the bytes because of little endian architecture.

As can be seen, now the very first instruction of AmsiScanBuffer has been overwritten.

As can be seen, now the result is 0 and AMSI is not triggered when we passed “Invoke-Mimikatz” string in powershell.

We took the help of WinDBG to patch the AmsiScanBuffer function. Many times in real world scenarios we might not have GUI access with windbg or any debugger with privileges to run it. So, there should be some way to programatically patch the functions without using any Debugger, luckily Microsoft has provided several document APIs to interact with it’s platform and various services. We will be leveraging the below Windows APIs to programatically patch the AmsiScanBuffer().

To make use of these API calls in powershell, we will first define the methods in C# using pinvoke (which allows us to call unmanaged APIs in managed code) and then load the c# into the powershell session using add-type.

Now we can use those API calls from inside powershell session.