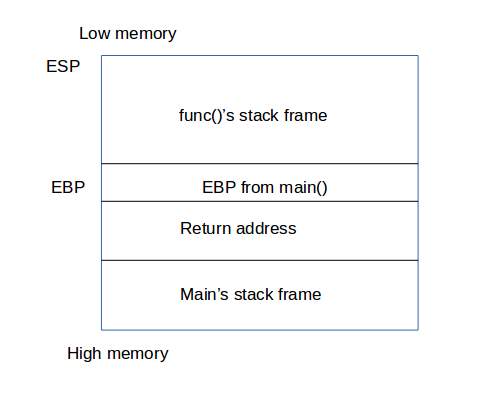 A stack is a limited access data structure – elements can be added and removed from the stack only at the top. It works on LIFO(last-in-first-out) principle. 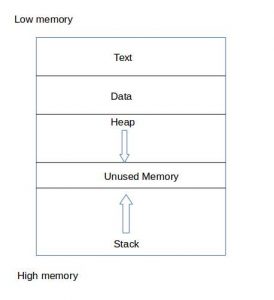 Text: Contains program code to be executed.
Data: Contains global information for program.
Stack: Contains function parameters, return addresses and the local variables of the function are stored.
It’s a LIFO structure. It grows downward in memory (from higher address space to lower address space) as new function calls are made.
Heap: Holds all the dynamically allocated memory. Whenever we use malloc to get memory dynamically, it is allocated from the heap. The heap grows upwards in memory(from lower to higher memory addresses) as more and more memory is required.

Now its time to look into intel based CPU registers.

For stack based buffer overflow we will focus only on EBP, EIP and ESP. EBP points to higher memory address at the bottom of the stack, ESP points to the top of the stack at lower memory location.
EIP holds the address of next instruction to be executed. Our prime focus is on EIP register since we need to hijack execution flow.EIP read only register, so we cannot assign the memory address of the instruction to be executed to it. 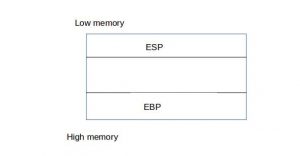 For sake of understanding lets say there is a program in which main function calls a func(). So when the program begins main() will be called and a stack frame is allocated for it and pushed onto the stack. Then main() calls func(), so before allocating

stack frame, pushing it onto the stack and handing over execution to func(), main() notes where execution will need to continue when func() returns (generally the line of code directly after the call to func()) by pushing this value (return address) onto the stack. 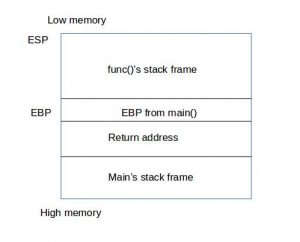 After func() finishes, it returns, its stack frame is popped, and the stored return address is loaded into the EIP register to continue execution to main. If we can control that return address, we can hijack which instructions are executed when func() returns.

Above code consist of two functions function1() and function2()
1) main() calls function1 and prints message “Executed normally”.
2) function1() intialises buffer of length 5 and copies string passed by main() into it.
3) function2() prints “Execution flow changed” and is not called from main() or function1().

Our aim here is to call function2() by controlling EIP and hijacking the execution. 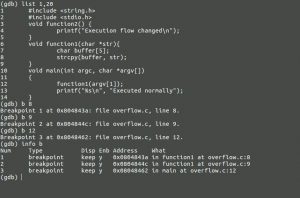 After adding breakpoints run program with argument “AAAA” and analyze ESP and EBP at each breakpoint and try to find location at which AAAA (0x41414141) is getting stored.

At function call, EBP and ESP are

At strcpy, EBP and ESP are

At function exit, EBP and ESP are

If you recall the figure we discussed earlier, “return address” is just below the EBP in the stack please refer image stack frame layout and breakpoint3. After figuring out EBP and “return address” on the stack lets try to crash the program and hijack execution. 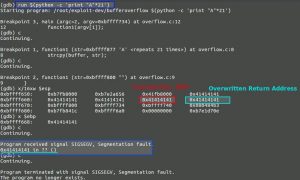 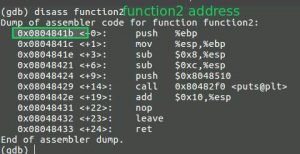 Before moving forward lets keep in mind we are using intel architecture based VM which is little endian so we need to reverse all bytes before generating our payload for hijacking execution. Now use python to generate our payload and run program with generated string as the value of argument.

After continuing through all breakpoints you will see message “Execution flow changed” and program will crash. 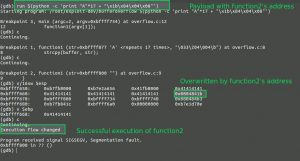 To check whether we successfully hijacked execution or not, exit of gdb and run the program with payload as the value argument.