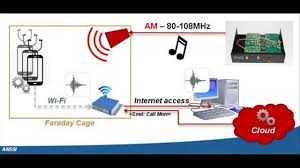 Hello Everyone and Welcome !!

In this blog series, we will be learning about Radio Frequency (henceforth RF) theory, various modulation techniques and how to analyze them.

Since the topic is huge, we will cover RF basics and theory in this part. Also, instead of using technical terms and definition, I will be using simple words to make you understand any topic/concept easily.

Why we should study RF ?? – Internet of things – IoT, we all have heard this term right??

The popularity of IoT and all the devices getting connected wirelessly is imminent in today’s life. The majority of these devices will communicate with each other wirelessly using radio protocols ( frequency range ~ 3 kHz to 300 GHz). IoT devices use different Radio protocols such as ZigBee, RFID, Bluetooth etc. for communication.

If we go back in time, many vulnerabilities have been found and exploited in IoT devices using some sort of radio communication. So, for pentesting IoT devices we need to have a strong foundation of various radio protocols, how they communicate and different modulation schemes they use for communication.  Thus, analyzing radio communication is of utmost importance from a security point of view and cannot be taken for granted.

The factor is Frequency.

So based on the frequency, Electromagnetic waves can be Radio waves, Microwaves, Infrared radiation, visible light, Ultraviolet light, X-rays etc.

If the frequency at which a wave is oscillating is between 3 KHz to 300 GHz, then it is a Radio Wave communication and the waves are called Radio Waves.

We will restrict our discussion to Radio Waves.

In the above diagram, we can see 3 cycles per second. Thus, the Frequency of the radio wave is 3. The unit of frequency is Hertz and it is denoted as Hz. Thus the frequency for above radio wave is 3 Hz i.e. 3 Hertz.

Radio frequencies are described as multiples of hertz –

Now go and praise my definition 😉

Picture shown below should clear the definition of Amplitude.

That’s the basic theory, we need for getting started with modulation and analysis of radio waves

Instead of writing about modulation schemes and their type, it’s better to go through the classification shown below and it is self-understanding.

These are some of the basic modulation techniques which are used in Radio Communication.

Radio Signal Analysis – We have already seen various modulation techniques, now let’s analyze some radio signal for identifying the modulation being used. But, for signal analysis we need some hardware device to capture the radio signal and some software to display the signal digitally on the screen. Let’s see what hardware’s and software’s are used.

Many hardware devices are used for Radio signal analysis  but, the one’s mentioned above are widely used.

In our Radio Hacking series, we will be using GnuRadio and GQRX. So I request you to download these software’s on your laptop/computer. For Linux – you can simply download from official software repository and for Windows – Google will give tonnes of resources.

That’s it for this post guys and soon I will come up with the next part. Thank You

Payatu Labs offers quality IoT penetration testing services and Practical IoT Hacking training worldwide. If you are interested in corporate training or security testing of your IoT products, kindly get in touch with us – info [_a t_] payatu DOT com