This blog is part of the IoT Security series, where we discuss the basic concepts about the IoT/IIoT eco-system and its security. If you have not gone through the previous blogs in the series, I will urge you to go through those first. In case you are only interested in hardware UART, feel free to continue.

If you are a beginner at hardware hacking and looking for some points to start with, this blog series can help you. As discussed, UART as a hardware attack surface in the IoT attack surface blog here. In this blog, we will discuss it in detail. Universal Asynchronous Receiver-Transmitter (UART) is used in most of the embedded devices. While attacking any device, if you can find a UART port on the hardware, hurray!! You got a way to break into the device. In this blog, we will cover the introduction to UART, why is it interesting from a hardware attack perspective, how to interact with it after finding a UART port on the device, and the possible attack scenarios.

During transmission of data packets, START (always logical LOW) and STOP (always logical HIGH) bits are added that defines the start and the end of the data packets. UART communication has one start bit, 5 to 8-bit data (or even 9 bit, if no parity bit used), and 1 stop bit, means 8-bit data transfer once the signal is high to low.

Each data byte to be transferred has a logic low START bit, data bits, optional parity bit, one or more stop bits. In most cases, the least significant (LSB) of the data bit is sent first. The start bit indicates the receiver regarding the arrival of a new data byte, followed by 5 to 9-bit data. An optional parity bit would be present after all data bits, followed by one or more stop bits that are always logic HIGH. STOP bit indicates the receiver regarding the completion of the data byte sent by the transmitter. More detail can be read from here. The rate at which the data bits are transferred i.e., bits per second, is called baudrate. The transmitting and the receiving UART interface should have the same baudrate, data length, parity bit, and stop bit for proper operation.

UART interface is used in microcontrollers to communicate with the peripheral devices. It is used in various communication devices like modems, wifi chips, Bluetooth modules, GPS modules, routers, cameras, and many other applications. UART is also used as an alternative debug interface for the embedded devices that do not have interfaces like a keyboard or monitor to debug. In further sections, we look into possible attack scenarios. We will brief you about the tools and a few methods that you can use to attack the device via UART.

One of the important aspects of why UART port is so interesting from the hardware security perspective is how it is used to connect to the debug shell or console of the embedded operating system of the device. If that is not secured properly, it gives the attacker the path to break into the device by getting access to the root shell.

Getting access to the device root shell enables the attacker to (Source - here):

Apart from getting access to the root shell, the adversary can sniff the communication between the peripheral device and the controller that is happening via UART serial communication. Also, if device console output is connected to UART, it gives much debugging and system log related info on the console. It can be very useful to the adversary for reverse engineering and knowing about the system’s behavior.

To attack the device via UART port, we first need to identify the UART pins RX, TX on the hardware. Below are the few images showing how most UART port test points/ pinouts on the hardware look. 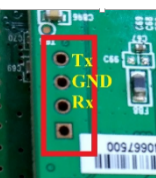 Case 2: You got access to the hardware. Once the hardware of a device is found, the first step should be to perform reconnaissance. Inspect each test point and chips present on the printed circuit board (PCB) to look if you can get a UART interface. You can read more about hardware recon here.

As shown in the images above, UART port usually has 4 pins RX, TX, Vcc, and GND. If we find a set of 4 pins together, we hope it is a UART port. Few ways in which you can manually identify the UART port pins on the device are mentioned below :

The microcontroller used in the diva board marked as U7 on the PCB is STM32F411x, we can find in its datasheet about the pins having UART interface connection. The image below shows that section of the datasheet. 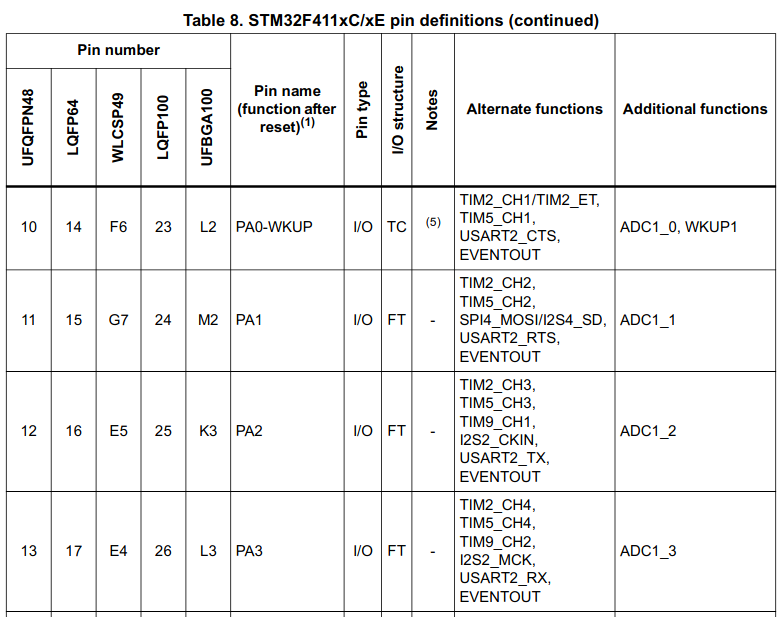 Depending on the IC package that is used in the device (here its LQFP64), we identify the UART port pins on the controller. Then, we set the multimeter in continuity mode as in the image below : 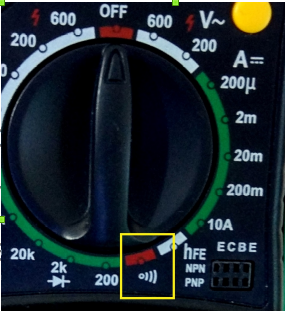 After identifying the UART port pins on the hardware, now its time to attack.

To sniff the communication

Tools like Logic Analyzer can be used to sniff the communication between the device having the UART interface and the controller.

The logic analyzer shows the signals on the RX and TX lines of UART port. These signals are as per the UART communication protocol structure, as discussed above. Softwares like Saleae Logic Analyzer, PulseView have the feature to detect these UART communication signals that directly shows you the decoded data w.r.t the signals.

As discussed above, in most embedded devices, UART port is used as a debug interface. It is connected to the device’s serial console that can give access to a root shell, log messages. To access the device’s console over UART port, we need an adapter that supports the UART interface. Before using any external tool with the device, we need to match their voltages. Also, while connecting the external tool and the target device, make their grounds common. Few tools that can be used as USB to UART converters for UART interfacing are :

The RX of the device is connected to TX of the adapter and the TX of the device is connected to the RX of the adapter. The ground of both devices is connected. Now, the device’s serial console can be accessed using serial terminals like minicom, picocom, putty, and teraterm. Before connecting, we need to know the baudrate. If the UART port scanning is done using the automated tools like bus auditor and jtagulator, we automatically get the baudrate. However, if the UART scanning is done manually using the multimeter or the voltage measurement, we need to find the baudrate. For example, with Expliot nano, we have EXPLIoT Framework that can be used to find UART baudrate using the plugin run uart.generic.baudscan -p <device_port> -v. In manual cases, we need to do hit and trials for finding the baudrate.

Once the baudrate is detected, the converter is connected to the host machine via the serial terminals to access the device’s serial console. If authentication is not implemented securely in the device, the adversary can directly get into the device after getting access to the root shell. It can be used to attack the device in several ways, as discussed above in the “Possible Attack Scenarios” section. Stay tuned for our future blogs, where we will demonstrate attacks using the above methods in some IoT devices.

In this blog, we learned about the UART interface, its application, the possibilities of attack scenarios, and the methods to attack. WeI hope you enjoyed and got some valuable information out of it. These tools and attack methods would give you a basic understanding of what to do when you find a UART interface on the hardware and play around with it to attack some devices.