This blog is part of the IoT Security series, where we discuss the basic concepts about the IoT/IIoT eco-system and its security. If you have not gone through the previous blogs in the series, I will urge you to go through those first. In case you are only interested in hardware I2C, feel free to continue.

In the previous part of this blog series, we had discussed the SPI protocol. This blog will discuss another hardware communication protocol, Inter-Integrated Circuit (I2C). So, if you are a beginner in hardware hacking and want to get started with basics, stay tuned; you are at the right place.

I2C is a synchronous serial communication interface. It is primarily used for short-distance intra-board communication. It was developed by Philips Semiconductor(now NXP Semiconductors). It provides a half-duplex communication mode (i.e., sender and receiver can transmit/receive the data one at a time, not simultaneously). It has a master-slave architecture that supports multiple masters and multiple slaves. It is a 2-wire serial interface.

It consists of two bidirectional open-collector(i.e., the device can pull the respective lines low but cannot drive it high. Hence, this avoids any contention between the devices when one is trying to drive the line high, and the other is trying to pull it low.), lines pulled up with resistors (it keeps the line high when the line is not pulled low by any device) :

Each device connected to the I2C bus has a unique address. The number of nodes on the bus is determined by the address space and the total capacitance of the bus, i.e., 400 pF (Source - wikipedia). It has a 7-bit or 10-bit address space. Further on, we will be discussing w.r.t 7-bit address space. In 7-bit, the maximum number of devices that can be connected over I2C bus is 128. Apart from data bits, I2C has START and STOP bits that indicate the beginning and end of the communication between the master and the slave.

The image below shows the general connection diagram in I2C (Source - here).

The image below shows bit transfer on the I2C bus (Source - Standard Doc).

The below image shows the START and STOP conditions on the I2C bus (Source - Standard Doc).

The below image shows the data transfer on the I2C bus (Source - Standard Doc).

If the slave cannot transmit or receive another data byte due to the slave being involved in some other process like servicing some internal interrupt, it can hold the SCL line low to keep the master in a wait state. Data transfer is continued when the slave is ready to receive/transmit another byte, and it releases the SCL line.

The receiver sends the acknowledgment bit on every received byte. ACK bit (i.e., receiver pulls the SDA line low in the 9th clock cycle after the transfer of 8-bit data) acknowledges the transmitter that the data has been successfully received and the following data can be transferred. In the given five conditions when:

In these cases, the transmitter receives no acknowledgment signal NACK (i.e., the SDA line remains high during the 9th clock pulse). The master can then either send the STOP signal to end the transfer or send a repeated START signal to start a new transfer.

Another essential feature of the I2C protocol is Clock stretching. There are cases when a slave device to which the master is communicating is not ready to perform the next transaction with the master. This can be when the previous operation on the slave side has not been completed yet. In this case, the slave device can perform clock stretching, i.e., the slave can hold the SCL line low after reception and acknowledgment of byte that makes the master wait until the slave releases the SCL line to high. I2C protocol has many applications. They are used to communicate controllers with sensors, actuators, memory chips, displays, real-time clocks, digital tuning, signal processing circuits, etc. If an adversary gets access to the device’s hardware part, there are several ways in which the I2C bus can be exploited if not implemented properly. In further sections in this blog, we will discuss the attacking cases and methods. The attacking methods would be very similar to what we discussed in the previous part of this blog series.

Case 1: You do not have the actual hardware, but you know the FCCID number of the device. Go to the FCCID website, search for the FCCID number of the device. If correct, you will find all the internal images and detailed internal, external information about the device. Seeing the internal image, you may get the hint for the presence of an I2C chip or any I2C based device on the hardware. Yayy!! Once you know that you have the attack surface, you can get/purchase that device and perform further required steps to attack the device.

Case 2: You got access to the hardware. Once the device’s hardware is found, the first step should be to tear down the device and perform reconnaissance. Inspect each chip, test points present on the printed circuit board (PCB) to look if you can get the access to the i2c bus. You can read more about hardware recon here. 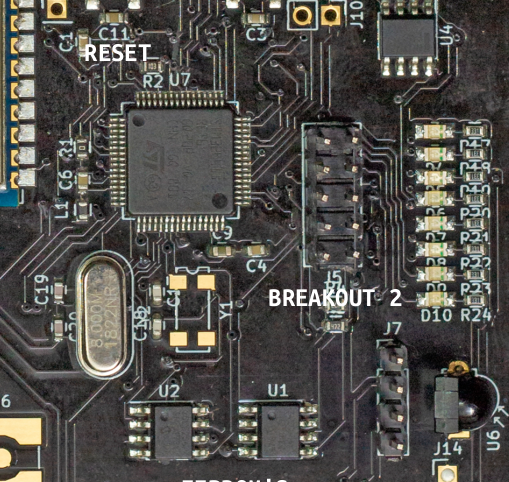 It contains some chips on the PCB. We googled the datasheet for each chip and found that one of its chips denoted as U1 is an I2C EEPROM 24LC256 After finding the chip, the next task is to identify if the I2C pins (SDA, SCL) of the chip is connected to some points on the PCB or not. Fetching the datasheet of 24LC256, we identified the respective pins of the chip as shown in the image below (Source - 25LC256 datasheet) 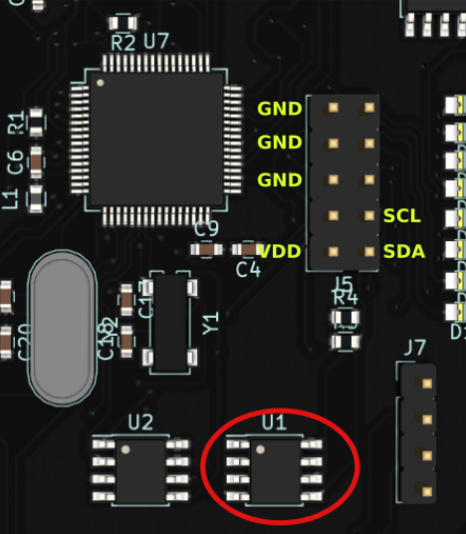 We have a goodie for you :) , EXPLIoT has Bus Auditor. It helps scanning and identifying debugging and communication interfaces exposed on any hardware board. It’s demo example in case of I2C can be read in the blog here

Yayy!! We can now use these pins to sniff, extract and attack the device :) 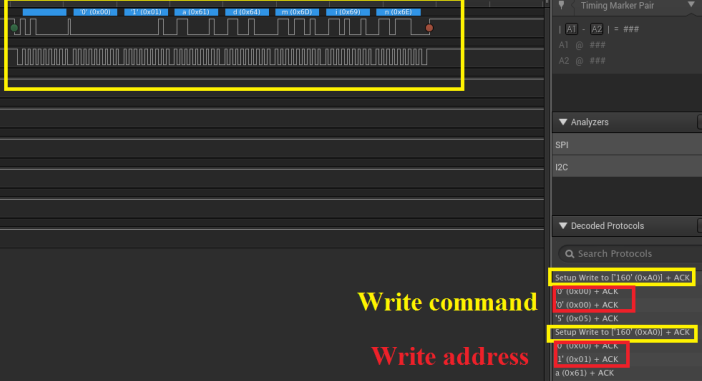 The logic analyzer shows the signals on the SDA and SCL lines of I2C. Decode these signals as per the protocol timing diagram. Softwares like Saleae Logic Analyzer, PulseView have the feature to detect these protocols that directly shows you the decoded data w.r.t the signals.

To communicate with the I2C chip present on the hardware, we need protocol adapter tools that support I2C protocol, and a framework that can make it feasible to communicate those chips without the host machine. (Sometimes, we also need to desolder the memory chips from the hardware, solder it on perf board or put it in a suitable TSOP socket and connect the required pin to the adapter.) Similar to as discussed in the [previous] blog, various tools and frameworks are available to extract the data from the memory chips. A few of them are mentioned below.

After selecting the tool and the framework that suits your requirement, check the tool’s voltage levels and the chip. In case the voltage level of the adapter tool and the I2C chip do not match, use level shifters.

Case 1: You are successful in finding the tools and framework that can support your I2C memory chip After finding the I2C chip on the device, our approach would be as mentioned below. 1. Take out the datasheet of the I2C chip. Identify the pins and voltage required. 1. Accordingly, choose the adapter tool that can be used. Connect the pins of the chip to the suitable protocol adapter, for example, EXPLIoT Nano as per its datasheet/pinout manual. The connection image is shown below. 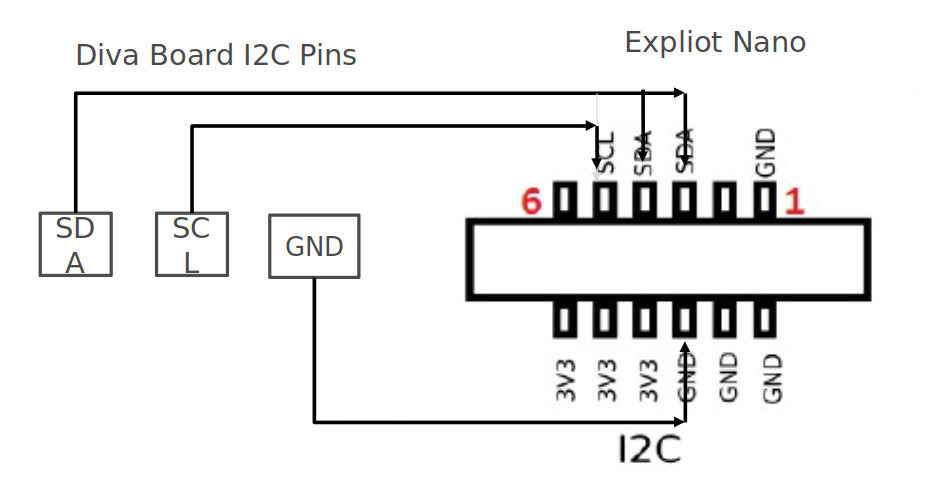 Similarly, other tools and frameworks as suited can be used to dump/patch the data from the I2C memory chip.

Case 2: You cannot find any tool/framework that can support your I2C memory chip In this case, the hardware setup steps would be the same as in the above case. Take any FTDI232H based adapter, match the voltage levels of the I2C chip and the adapter. Do connection as per adapter and the chip’s user manual/datasheet.

In this case, you need to write your framework, or you can even add the currently unsupported chips to any of the open-source frameworks of your choice. So, for this, you first need to read the datasheet of the I2C memory chip carefully. The datasheet contains all the details required to write your script to read/write the data from/to the memory chip. For example, for I2C memory 24LC256, let us have a glance at its datasheet. It gives the detailed instructions required to read, write, and perform other actions. The image below from 24LC256 datasheet, shows the device addressing method used in this chip.

Similarly, the below image shows I2C write operation in this chip.

So, following the I2C memory chip datasheet instructions, one can write a script to dump or program the chips. In future blogs, we will come up with detailed I2C memory extraction via real-world example scenarios along with other clock glitching related attacks on the I2C bus. So, stay tuned :)

What measures can make it difficult for an attacker to attack?

In this blog, we learned about the I2C protocol, its application, the possibilities of attack scenarios, the methods to attack, and few preventive measures. We hope you enjoyed and got some valuable information out of it. These tools and attack methods would give you a basic understanding of what to do when you find an I2C device on the hardware.